So you want to upload large files from your users browsers, directly to S3. You’ll find plenty of examples of how to do this by uploading the whole thing in one go, but S3 supports multipart uploads - where you divide the file into chunks, which you can then upload in parallel (and even retry if something goes wrong!).

Dublin In Less Than 48 Hours

In which I visit another country.

I found myself in Singapore.

I can now add another country to my visited list, Netherlands. I’ve spent the last two days in Amsterdam for a work conference, though at least this time I made it out of the hotel to do a little bit of sightseeing.

On Saturday I went for a walk. 4.2 miles of walking, in fact.

I left New Zealand to go on a grand adventure 444 days ago today. In that time I’ve lived in Canada, and the UK, and visited the US, Greece, and France. I think it’s going reasonably well so far, which is probably a good thing as I couldn’t afford to go home just now. 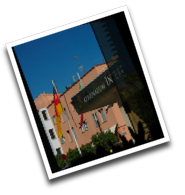 One Week Into Living In London

A collection of thoughts one week in.

I was woken up at some ungodly hour (around 10am or so) by a friend reminding me that today was the day: the walking tour of the History of Vancouver’s Sex Trade. No, there’s no mistake there. I’m talking about prostitution and brothels and where it was and who tried to clean it up. (The answer to those two questions are it varied through time, and mostly politicians trying to get into office.)